Tough Cops is an animated action/comedy show following the exploits and heroism of two unruly detectives: Butch Cardigan and Carole Muldoon. When the new Mayor is elected, he decides that the city no longer requires the shady services of the Tough Cops, and sends them to the huscow for a ten year bid. After serving five years behind bars for corruption on the job, Cardigan and Muldoon are released by Mayor Belle to track down his missing daughter, as only the brand of justice offered by the Tough Cops will get her back! 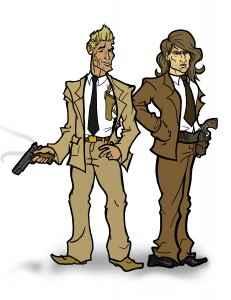 Police officers these days don’t possess the shady tactics and steel guts to get down to the criminal level, to crack the case. Left with no choice, Chief Camano adheres to the advice of Captain Maclewski to release the Tough Cops: Butch Cardigan and Carole Muldoon, from behind bars. The pair must solve the case of the Mayor’s missing daughter, or it’s lock-up for another ten. The show’s dynamic will focus on the Tough Cops’ readjustment to a Politically Correct force, their newfound freedom, and their potential for crossing the line. Not to mention romantic pursuits, both temporary and for life.

Butch Cardigan is the savant, the tougher of the two cops, with the social skills of a chimpanzee. His senses are sharp for clues and his mind keen on connecting the dots. His partner, Carole Muldoon, is the Don Juan, the ace driver of the Tough Car with a penchant for the ladies and an extensive contact list for many criminal organizations in the city of Greaseburg. With their combined skills, they’re virtually unstoppable and when separated, practically hopeless.

Captain Maclewski has been Cardigan and Muldoon’s mentor and father-figure since their parents burned in an orgy-fire when they were teenagers. He’s the anchor and heart of the show, offering advice and protecting the Tough Cops from powerful criminals and, most importantly, from themselves.

The show is set in the Greaseburg Police 25th Precinct: a newly renovated, state-of-the-art facility that barely resembles its run-down, dilapidated past. Years ago Greaseburg was a festering dump, run by corrupt Mayor Telly Diggs and staffed by dirty policemen on the take. That has all changed as Mayor Belle, Greaseburg’s newly elected Mayor has cleaned the streets and put the dirt behind bars. The GPD is a squeaky-clean, politically correct force now – almost nauseatingly so.

The show ventures the audience upon the streets of Greaseburg leading to many criminal points of interest such as money laundering businesses, underground casinos, dive bars, criminal hide-outs, and a cloning facility.