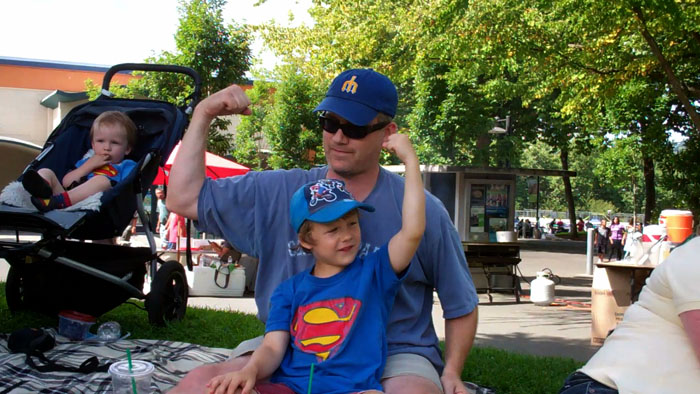 I’ve never been one to care about money. Earning more than I needed to survive was simply an indulgence, until I became a father. It was shortly before getting married that I first began to feel the responsibility. “You have to start earning more money,” said a friend of my fiancée. “That’s what husbands are supposed to do.” I was taken aback by her antiquated comment. Nonetheless, I recognized that raising a family meant a new financial reality.

I began to focus more on building a “career” and not just having a series of jobs. I was still determined to do what I loved to do; I just had to find a way to earn a decent living doing it. “Honey, I’m pregnant!” “Congratulations, you got the job!” I found out I was going to be a father and that I had landed a dream job in the same week. Everything was falling into place. We could now start-planning renovations on the little tear down we’d bought, and my ascendancy to adulthood would be complete. When my son was born, my heart opened in ways I never knew possible. I would have gladly been an at home father, but with the added cost of a new baby and renovations going well over budget, I was grateful that the work I loved could provide security for my family.

And, then it was a year and a half later. “You’re fired!” The news devastated me. I felt like a complete failure. I hid my pain like a good alcoholic can hide his drinking. But little did friends and even family know that, on most days, my wife came home to a messy house, an empty fridge and a shell of a man. I used to feel so virtuous whenever I changed a diaper or when my toddler son would scream for “dada” and not his mom when he fell down. But it’s easy to be virtuous when you are making eighty five thousand a year. Was that it? Was this all about money? I was taken aback by my own reaction. Me—the man who never cared about money is now feeling totally powerless for not making any? Without that breadwinner title, society was now defining me as a failure. I believed it. I felt useless to my family. My wife’s old-school friend was right. Emerging from this depression I found my life’s purpose: I was born to be a father, and I was born to help other men embrace fatherhood to the fullest. I am a champion of fatherhood—a “dadvocate” who now earns his living by helping corporations thrive by recognizing and adapting to the changing needs of working fathers. It still feels good to be the breadwinner. It always will. But to know I am helping to promote fatherhood and am helping to redefine for my now two boys what it truly means to be a man, feels even better.